6 months into the training… 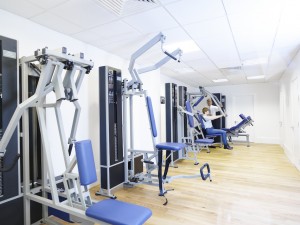 In my last post, I shared an article I’d written in January 2014, after just a few weeks of training on Rev5 (not yet known as Rev5 then!).

I thought you’d like to read my update 6 months later:

Earlier this year, I wrote about my experiences with a new type of workout, called the Big Five.

Well it’s been 6 months since then, and I’ve been visiting Windsor religiously each week for my 15 minutes of training, so I thought it might be time to give you an update.

I don’t know if you remember what the workout entails, but in case you don’t here it is in a nutshell:

It’s a form of resistance training you do for just 15 minutes a week, in a 1-1 setting with a trainer. Because the gym is cooled, and the session is so short, you don’t sweat, so no need to shower, and you don’t even need to change into gym clothes or trainers. You just go in as you are, exercise and leave!

The benefits are quite astounding (and thoroughly researched) – firstly the ongoing gain in muscle strength, which I’ll come to in a minute, secondly the knock on effect of building muscle strength, i.e. the conditioning of the rest of the body, and particularly organs like the heart, which have to adapt. This type of training is also unique in the way it taps muscle fibres and depletes glycogen stores in a way an ordinary gym session wouldn’t. This makes it particularly good for improving insulin sensitivity and particularly beneficial in conditions like diabetes, or insulin resistance.

In fact, it has been shown to increase glucose uptake in the cells by 23 percent after only four months.

As we get older, we naturally lose muscle – around 5% every 10 years from age 30 onwards! This gradual and insidious process undermines our general health (metabolism, bone strength, cardiovascular health, and more) so that when we get to age 60, 70 or 80, suddenly the degeneration becomes noticeable. One day you find yourself struggling to get out of your chair! This is why it’s so important to maintain, and if possible even increase your muscle strength as early as possible.

Each time you do a Big Five workout, all of your statistics get noted down, as well as your blood pressure before and after exercise. So would you like to know my stats after 7 months of training?

Torso Pull Down: increased by 102Kg

And they keep increasing, although more slowly now, as you can imagine! You’ll notice the blood pressure and pulse measurements before and after exercise as well, and these have consistently decreased.

Of course in everyday life, I’m not lifting heavy weights, but the impact it’s had is that I feel stronger and ‘more upright’, lighter when I walk up stairs and any lifting or physical exertion just feels more effortless than before. And it would be interesting to see a ‘Sliding Doors’ scenario at age 60 or 70 – how different would the ‘me’ who’s been doing the Big Five be from the ‘me’ who hadn’t?!

bone density brainpower diabetes Evening Standard fibre glucose glycogen healthy ageing high intensity training insulin longevity muscle myokines nutrition osteoporosis press article protein sarcopenia
We use cookies on our website to give you the most relevant experience by remembering your preferences and repeat visits. By clicking “Accept”, you consent to the use of ALL the cookies.
Cookie SettingsAccept
Manage consent

This website uses cookies to improve your experience while you navigate through the website. Out of these, the cookies that are categorized as necessary are stored on your browser as they are essential for the working of basic functionalities of the website. We also use third-party cookies that help us analyze and understand how you use this website. These cookies will be stored in your browser only with your consent. You also have the option to opt-out of these cookies. But opting out of some of these cookies may affect your browsing experience.
Necessary Always Enabled
Necessary cookies are absolutely essential for the website to function properly. These cookies ensure basic functionalities and security features of the website, anonymously.
Functional
Functional cookies help to perform certain functionalities like sharing the content of the website on social media platforms, collect feedbacks, and other third-party features.
Performance
Performance cookies are used to understand and analyze the key performance indexes of the website which helps in delivering a better user experience for the visitors.
Analytics
Analytical cookies are used to understand how visitors interact with the website. These cookies help provide information on metrics the number of visitors, bounce rate, traffic source, etc.
Advertisement
Advertisement cookies are used to provide visitors with relevant ads and marketing campaigns. These cookies track visitors across websites and collect information to provide customized ads.
Others
Other uncategorized cookies are those that are being analyzed and have not been classified into a category as yet.
SAVE & ACCEPT