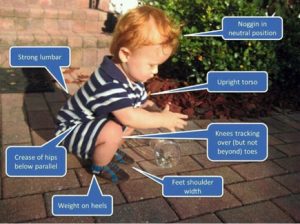 I was at work earlier this week and found myself demonstrating a resting squat; the ( unlucky!) person opposite me was in equal measures surprised and impressed but what I found shocking was their insistence that if they ‘ ever got down they would never get back up.’

Being of Asian origin and having travelled extensively I am comfortable with this position and indeed it has been imperative faced with squat toilet facilities but in the west it is considered neither particularly attractive nor necessary unless perhaps camping.

The science however is mounting up and the fact is that making time to regularly take up this position helps stretch out tight hip flexors, the lower back, engage the core, protect the pelvic floor and when used as part of a dynamic movement strengthens the quads – ie undoing the relentless damage we are doing to ourselves through modern lifestyle trends, occupations and choices.

Shawn Stevenson explains more in his excellent article , ‘ The Resting Squat – How Squatting Makes You More Human’ which I have taken the liberty of quoting below:

The science is stacking up, and word is out that sitting for prolonged periods is devastating to our health. Former NASA scientist, Dr. Joan Vernikos, has compared sitting in a chair for prolonged periods to being weightless in space. This is due to the fact that the muscles, bones, joints, and other tissues aren’t supporting themselves naturally any longer. This newly dubbed “Sitting Disease has been shown to impact your blood pressure, blood sugar, and your ability to burn fat.

It’s not that sitting is bad. It’s more so how we’re sitting that’s really smacking our health around right now. The human body was never designed to sit in an awkward 90 degree position with certain muscles completely shutting off, while others are being dramatically over-stressed.

Sitting triggers your butt muscles to do absolutely nothing. They completely shut off and get used to not “activating” normally. This deranges your ability to walk, run, jump, stand up, sit down, and pretty much any other activity you can think of. Your glute muscles become limp and no longer fire properly when they are deconditioned from sitting too much.

Your abs will be closer to soft-serve ice cream than a well-defined washboard if you’re sitting too often. Your abdominals actually help to hold you upright, but when you sit back in a chair they no longer have to work, and the battle of the bulge can take place. Your abs will quickly lose their tone and strength if you totally take them out of the equation by sitting.

Unlike Shakira, your hips will be lying to you and everyone else when you try to exert yourself. Hip mobility and functionality is critical to all basic human movement patterns. Your hips provide stability and balance, and lack of mobility here is one of the major causes of serious injury.

It’s now understood that the largest contributing factor to poor bone density is lack of activity. Your bones need resistance to drive nutrients into them to trigger development. Sitting too often will lead to bonier bones, plus at heightened risk of disease and injury.

People who sit more often are at greater risk of herniating their lumbar spinal discs. Sitting in chairs is synonymous with having “shortened” hip flexors. A large muscle called the psoas is a major hip flexor muscle that runs through the abdominal cavity. When the psoas is short (or tightened) from sitting too much, it pulls the upper lumbar spine forward which puts you out of alignment. Your upper body now rests on your ischial tuberosity (sitting bones) instead of being distributed along the arch of the spine. This is a leading cause of back pain and overall loss of function.

Sohrabi et al in their article

state that’’ the usual way to pass a stool, even in Western countries until a century ago and still today in many places, involves a position where the thighs are pressed against the abdominal wall and this is believed to assist stool evacuation.” There is indeed scientific evidence that squatting results is faster and more complete defecation helping us understand how it could prevent bowel diseases such as diverticulosis.

Microbiologist Guilia Enders concurs in her book , Charming Bowels , that we can evacuate more efficiently when we squat

This is because the closure mechanism of the gut is not designed to “open the hatch completely” when we’re sitting down or standing up: it’s like a kinked hose. Squatting is far more natural and puts less pressure on our bottoms. She says: “1.2 billion people around the world who squat have almost no incidence of diverticulosis and fewer problems with piles. We in the west, on the other hand, squeeze our gut tissue until it comes out of our bottoms.” Piles. Lovely.

What is a resting squat and why is it important?

Conventional sitting puts your weight onto another object by placing your butt on it and turning many critical muscles off. A resting squat is a posture where you squat down fully, lowering your hips towards the ground and your weight is equally distributed and controlled by your body.

For countless ages throughout time, human beings have been able to crouch all the way down into a resting squat for relaxing, working, cooking, communing, and even for using the bathroom. For babies and children it is the most natural position to assume .

If you can’t get down into the full resting position of a flat-footed squat, it’s time that you start working on it. If you don’t, you are dramatically limiting your mobility and ability to function at an optimal level. Start slow and use something to support yourself as you lower down. Trainer Debbie Atkins at Rev5 showed me a brilliant trick whereby as you lower yourself back and down you wriggle your toes – don’t ask me why but it works.